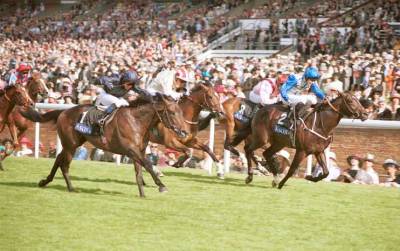 Horse races, or meetings, have been popular in England for hundreds of years. There are three horseracing courses inside the M25, the major road that circles London, and one just outside city limits.

Kempton Park
Kempton features an all-weather poly track to allow year-round and night thoroughbred racing, as well as a steeplechase course. Their biggest event of the year is the Boxing Day meeting (26 December), known as the King George VI Chase.

Between late October and Christmas, Kempton holds several twilight meetings which begin at 4pm. Located near Sunbury on Thames, not far from central London.

Sandown Park
Fairly close to Kempton but on the opposite side of the Thames, in Esher. It hosts both flat and jump racing, and has a reputation as one of the best viewing tracks in the country. Because all its races are on turf, there is no flat racing during the winter months and its schedule is not as busy as Kempton’s.

Epsom
Epsom is the venue for the most famous thoroughbred race in Britain, The Derby, first run in 1779 and contested every year in early June by three year-old colts. The course itself is unconventional, allowing Derby horses to run uphill, followed by a steep descent and a swinging turn. Epsom, a lightly-used course with no winter meetings, is located on the very edge of south London.

Royal Windsor
Outside of London but close enough to attend its popular summertime meetings. On sunny Monday evenings during the summer, you can catch a train from Waterloo to Windsor station and take a short boat ride straight to the racecourse.

Placing a bet on a horse can be made at the Tote or through the bookmakers’ board in the betting ring.

The Tote is a lineup of booths with attendants behind glass windows. You approach the attendants, tell them what kind of bet you want (e.g., singles, each-way, forecasts, trifectas, etc.), depending on how well you know both your gambling strengths and those of the animals running. The Tote takes all the money on a single bet and puts it into a pool, then they take a cut for themselves and divide up what’s left between all the winning tickets.

The bookmakers (or bookies) in the betting ring display their suggested odds on a computerized screen that allows you to choose your bet and then provides you with a printed ticket. If your animals wins, the bookies will pay you out at their odds. All ring bookies are trying to attract business, so some will offer slightly better odds than others; the trick is to jump in with your bet when you think the odds have reached their limit.