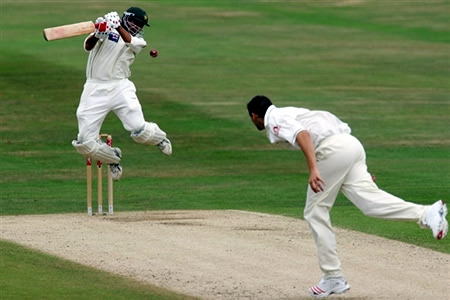 Cricket is England’s summertime team sport. It has a variety of formats and can be played over one, three, four or five days.

International cricket is the biggest draw for spectators and is played throughout the year, around the world. Every summer, England will play a couple of series against touring teams and many of these games (but by no means all) will be played in London.

**The cricket season in England runs from April until September**

The two main cricket venues in London are Lord’s in the St John’s Wood area and The Oval in Kennington, south London, just over Vauxhall Bridge.

As well as being the home of the England and Wales Cricket Board, Lord’s is where Middlesex County Cricket Club are based and play most of their home matches; if England is playing there, though, Middlesex have a number of other venues from which to choose, ranging from Uxbridge, Richmond and Ealing in west London to Southgate in north London.

Surrey County Cricket Club have been based at The Oval since 1845. and while the tickets for England international games are always in high demand, it’s a lot easier to see county sides play.

Try to see a Twenty20 game at Lord’s or the Oval. Twenty20 is the shortest version of the game, lasting about three hours; it’s all action and has been hugely popular with fans. Weeknight games in June and July are normally snapped up months ahead, so check out the websites for Lord’s or the Oval for advance ticket information.

If you don’t manage to get to see the game you want live, SkySports has excellent live TV coverage of all formats of the game throughout the cricket season.