Getting ready for the Tour de France start in London 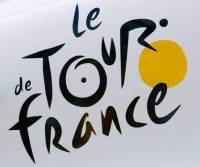 With just over three weeks to go before the Tour de France begins in London the organisers have been detailing some of the activities for spectators coming to London for the Prologue and Stage 1 of the Tour.

Le Grand Depart, as the start of the Tour de France is known, begins on Friday 6 July with the Opening Ceremony taking place at 6pm in Trafalgar Square when all the riders in this years’ race will be introduced. The Prologue on Saturday 7 July is a 7.9km individual sprint around central London and the first rider starts at 3pm in Whitehall. At 1pm the Tour’s publicity caravan with over 200 vehicles and floats makes its way along the course giving free gifts to the crowd and playing music. The first full stage leaves the Mall at 10.25am on Sunday 8 July with the publicity caravan leaving at 8.40am. 18 giant screens are going to be set up in central London so fans can keep up with the action.

A Tour People’s Village will be set up in Hyde Park next to the Prologue course from 6-8 July, featuring informative exhibits, interactive displays and entertainment as well as stands featuring the food, culture and tourism of Britain and France. They’ll be the Tour de France interactive Roadshow vehicle, a display of bicycles and other pedal-powered vehicles, a cycling history show, a try-out area where visitors can have a go on a variety of bikes, a cycle track, a stunning photographic exhibition and displays and demonstrations from organisations involved in the cycling industry.

The Hyde Park Cycling Festival takes place between 11am-5.30pm on 8 July after the Tour peloton has left for Canterbury on Stage 1. The festival is a programme of cycling activities on a 3.5km section of the Tour de France Prologue course within Hyde Park including over 300 elite, international athletes competing in a wide variety of races. They’ll be a International Tricycle Criterium race and hand-cyclists will be travelling from Australia and South Africa to race in one of their world series events. In between the races a parade of historic bikes will take place.

The Tour start should be a great event for London, which is keen to get more people cycling. Below is a promotional clip for the start of the race.