Chelsea tell their fans be nice to Tottenham 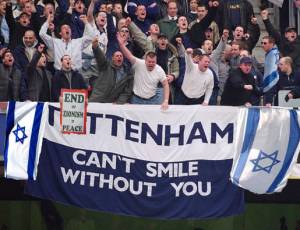 Chelsea are at home tomorrow to Tottenham in a big London derby that is important to both teams. The club seems to have gone all politicially correct and lost their sense of humour though, because they’ve been warning their fans on the Chelsea website against making ‘anti-semitic’ chants against Tottenham fans.

For anyone not familiar with the London football scene, Tottenham are a club in North London with a long history of attracting part of their fan base from the Jewish community, about 1.5 miles south of their stadium is Stamford Hill, an area with the highest number of Orthodox Jews in London, and they’ve also had some high profile Jewish owners in the last 20 years such as Irving Scholar and Alan Sugar.

Tottenham are affectionately known to other London clubs, especially Arsenal, as the ‘Yids’ and over time their fans have adopted this name, calling themselves the ‘Yid Army’ and ‘Yiddos’. Most Tottenham fans today aren’t Jewish and I don’t think the use of the word Yid by opposing fans has any anti-semitic meaning these days, its just a word that’s had a long association with Spurs and something other fans can pick up on.

I can’t believe that any Tottenham fan going to the game tomorrow, Jewish or not, would be offended by Chelsea fans shouting ‘Yiddo’ at them. They’d expect it and come back with something of their own, that’s what gives football grounds their atmosphere. The only people who would be upset are the professionals in the race relations industry whose raison d’etre is to keep finding things to campaign against.