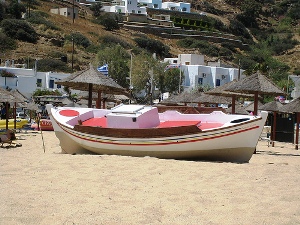 Greece is known as one of the best party destinations in Europe. Sure, it’s located further from the UK than Ibiza, but not only can you save money on accommodation and meals, but you can also add some cultural tourism to your getaway.

The best party islands in Greece include Mykonos, Zante (Zakynthos) and Ios.

Ios has been famous among the young and hip party crowd for decades, and still retains this same feel. It’s an excellent choice if you want to combine history with partying. To get here, though, first you need to get to Athens.

Cheap airfare to Greece from London isn’t hard to find, though there aren’t that many low-cost carriers serving the country. Some of the best deals are offered by major airlines on flights into the capital.

It’s a good idea to stay in Athens for a night or two before heading to Ios. Athens hotels range from cheap to very expensive, but it’s very easy to find an affordable place located close to the main tourist attractions.

To get to Ios, you’ll have to take a ferry; the island has no airport. However, you can save time by first taking a short flight to Santorini or Mykonos from Athens and then taking a ferry to Ios.

To fly from Athens to Mykonos, expect to pay about €55 for a one-way flight on a small Greek carrier like Olympic Air.
A ferry ticket between Mykonos and Ios will cost approximately €33/person/one way.

An escape to a Greek island is a brilliant choice for clubbing with the girls or a romantic getaway with your beau. In mid-May, the weather is warm enough to catch a lovely tan, so be sure to pack your bathing suit and sunscreen.