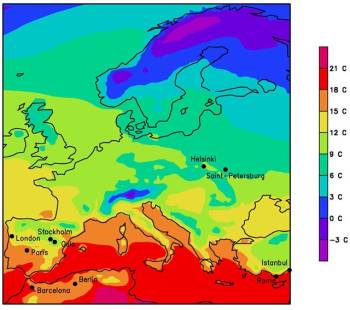 The map on the left has been produced by the International Centre for Research on the Environment and Development to illustrate how global warming will impact Europe in the next few decades. It moves the position of cities to where the predicted climate they’ll have in 2071 would put them in relation to Europe’s current climate.

As The Guardian outlines in their article, London can expect a climate in 2071 similar to that of today’s west coast of Portugal, with temperaures up 3-5 degrees C and 40% less summer rain.

London would seem to have got off lightly, Paris would be as hot as baking central Spain and Berlin would reaching North African temperatures. Oslo and Stockholm look like they’ll in demand places to live with a Scandinavian standard of living and a Barcelona like climate.