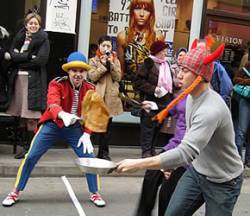 Tomorrow is Shrove Tuesday, otherwise known as Pancake Day in the UK. Shrove Tuesday is the day before Ash Wednesday and the beginning of Lent, traditionally the start of 40 days of fasting in Christianity. Shrove comes from the old Anglo-Saxon term shriven, where Christians went to confession and were absolved of their sins before Lent.

In Britain it also meant using up eggs, milk, sugar and flour before the fasting began and making pancakes was the easiest way to use them. The traditional pancake is a lot thinner than say the American version, more like a French crepe, fried on a hot pan or skillet, flipped over by tossing in the air halfway through cooking (very important) and served with caster sugar and lemon juice. To toss a pancake successfully is not as easy as it looks, the right pancake mix, a hot pan, speed and practice are what’s needed.

Holding pancake races are also part of the tradition in the UK, with individuals or teams racing over a course carrying a frying pan and flipping a pancake as they go. You’ll find a number of large events in London tomorrow afternoon, here are a few of the main ones.

The Great Spitalfields Pancake Race takes place at the Dray Walk, The Old Truman Brewery on Brick Lane and is open to teams of four (fancy dressed if you like). You need to bring your own pan and the’ll supply you with the pancakes, the heats start at 12.30pm and the eventual winners receive an engraved frying pan. There are prizes for the runners-up and best dressed teams and free pancakes to eat for competitors.

The All Hallows Great Pancake Race takes place every year close to the Tower of London, in front of All Hallows church on Byward Street. This is another team event where you need to bring your own pan and is a charity event in support of the Teenage Cancer Trust. It starts at 1pm, is free to attend and the nearest Tube is Tower Hill.

Poulters Company Shrove Tuesday Pancake Races This event features teams of four from the traditional trade guilds of the City of London and among the trades represented by teams will be butchers, chartered surveyors, clockmakers, cooks, cutlers, distillers, farmers, farriers, founders, fruiterers, fuellers, gunmakers, musicians, the Old Bailey, poulters, tax advisors and turners and many more. The event begins at 11am with races starting at noon in front of the Guildhall in the City of London, is free to attend and the nearest Tubes are St Paul’s, Mansion House or Bank.