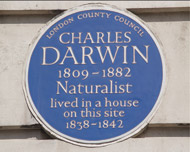 Walking around London you may notice some round blue signs on buildings with someone’s name and some personal details on them, these are part of the Blue Plaque scheme, currently run by English Heritage.

They were set up to commemorate buildings where someone famous lived or an important event took place and the first was put up in 1867 to mark Lord Byron’s house. Originally run by the Royal Society of Arts, English Heritage took over the project in 1985.

Blue Plaques are erected after nominations from the public go before the English Heritage Blue Plaque Panel and show they’ve met certain criteria, including showing the person in question made an important contribution in their area of life, were deserving of national recognition and were exceptional and outstanding personalities.
They also have to have been dead for 20 years or have been born 100 years ago.

Only about one in three nominations is accepted and if one is rejected they can’t be considered again for at least ten years. There are around 20 plaques put up in London every year and it normally takes between 2-5 years from the time of the first proposal to finally getting a plaque installed on a building. The owners of the building have to agree to have the plaque there and the entire cost is paid for by English Heritage. English Heritage says if the proposed person is foreign they must be ‘of international reputation or significant standing in their own country’.

Only one plaque is allowed per person, they are about 19inches in diameter and made from a glazed clay. There are currently about 800 up around London including one for Sherlock Holmes in Baker Street even though he’s a fictional character.