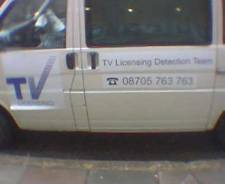 New figures in the Evening Standard show that the borough of Newham in East London had the most tv licence evaders in Britain last year. A tv licence is complusory in the UK and the licensing authority says ‘you need a TV Licence to use any television receiving equipment such as a TV set, set-top boxes, video or DVD recorders, computers or mobile phones to watch or record TV programmes as they are being shown on TV.’

Currently a licence costs £135.50 a year and 3,914 households in Newham were busted for not having one last year and face a £1,000 fine. Another London borough, Brent, had the second highest number of non-payers with 3,362 and London had more licence evaders than Manchester, Birmingham and Glasgow combined.

Places like Newham and Brent are poor areas with a high concentration of immigrants so you can understand them not realising Britain has a crackpot law saying who need a licence to watch tv. If they can get away without paying good luck to them.

Anybody thinking of spending sometime living in the UK will soon have a tv licensing form dropping through their door, and as most people are honest and pay, its fairly easy for the authorities to target houses and apartments that don’t have a record of buying one.