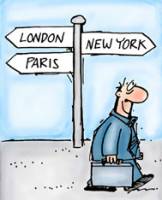 New York Magazine has a long series of articles under the title London (The Other New York) which start by asking the question, if Paris was the capital of the 19th century and New York the 20th, will London be the world capital of this century?

They point out London’s construction boom and the growing immigrant population, with the number of foreign-born people in London up to the levels New York experienced in the early 20th century. London has pulled ahead of New York as a world financial centre, especially after 9/11 made travel to the US more difficult and the Enron/WorldCom collaspes brought a whole load of new financial regulations to the US.

On the face of it, London would seem to be leading New York in some headline-grabbing ways, but when their article breaks it down under a number of cultural, lifestyle and quality of life headings, the general vibe from most of their contributors, British and American, is that New York is still the best place to be out of the two.

The cost of living in London is horrendous, housing and public transport incredibly expensive. Sure there are more Michelin starred restaurants than New York but unless you’re an investment banker or Premiership footballer, who can afford them. There are more stabbings and shootings in London than ever and according to the people asked by New York Magazine London’s more at risk from terrorist attacks because of our porous borders.

An interesting piece that overall says the Big Apple is still the daddy of world cities.