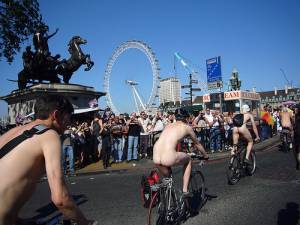 The fourth annual London Naked Bike Ride takes place this year on 9 June 2007. Its part of the World Naked Bike Ride series that has rides in over 20 countries including Australia, Brazil, Mexico, Russia and the US.

The number of riders taking part in the London event has risen from 60 in 2004 to 700 in 2006, they’ll probably be a similar leap in participants this year. The race assembles at 3pm at the Hyde Park Corner side of Hyde Park and the 10km (6 mile) route heads off down Piccadilly to Trafalgar Square, down Whitehall to Westminster Bridge, over the Thames and on to Waterloo. Back over Waterloo Bridge, through Covent Garden up to and along Oxford Street, down past the US Embassy to Park Lane and back to the finish at Hyde Park.

The ride is not restricted to bikes, you can rollerblade or rollerskate, ride a unicycle or probably any other manpowered machine. The organisers say the police are cool with it and you won’t get arrested for going naked, they also say there’s a good chance you’ll be photographed by someone somewhere along the route, so keep that gut sucked in.

The London ride has set out a set of Objectives and Demands, some of which seem fair enough, others which come over as a pie in the sky wish list.
Objectives
*Protest against the global dependency on oil. (you may as well protest the tide coming in)
*Curb car culture.
*Obtain real rights for cyclists. (Not sure what this means, if I get on my bike I don’t feel I’m denied any rights)
*Demonstrate the vulnerability of cyclists on city streets. (Would have thought this was pretty obvious)
*Celebrate body freedom.
Demands
*Real rights for bikes. (Same as above)
*Safer streets for cyclists. (Achieved by banning all cars I guess)
*Cycle-only zones in cities.
*Separate 2-way cycle lanes. (The roads just aren’t wide enough)
*A ban on car advertising. (Ridiculous)

If you’re brave enough to let it all hangout in front of millions of Londoners and tourists on a Saturday afternoon in June you might enjoy all the attention the Naked Bike Ride will get you.