England to soon be smoke free 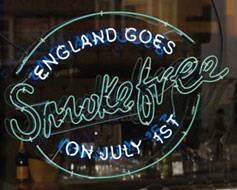 If you’re coming to the UK this summer be aware that on 1 July 2007 England joins Scotland, Wales and Ireland in banning smoking in all enclosed public spaces and workplaces. So no more smoking in restaurants, pubs, clubs and other nightspots. The ban also includes any work vehicles used by more than one person and employers will be fined if the relevant signage is not displayed in premises and in vehicles.

There’s a range of penalties and fines for people and employers who don’t observe the smoking ban. If you’re caught smoking in smokefree premises or work vehicles there’s a £50 fixed penalty which rises to £200 if you have to be prosecuted and convicted by a court. If an employer fails to display the correct signs there’s a £200 penalty for the manager in charge which rises to £1,000 if taken to court, and there’s a £2,500 fine for a manager who fails to prevent smoking in a smokefree place, so expect pub landlords to be all over you if you light up inside.

The ban also includes cigar lounges, shisha and hookah water pipe bars and cafes which no doubt hasn’t gone down too well along the Edgware Road where many Lebanese and other Arabs socialize. There was a report on the booming sale in gas powered outdoor heaters with many pubs trying to set up outdoor smoking areas for customers, but as these heaters aren’t the most environmentally friendly it won’t be long before the government targets them.

If you’re in a London pub after 1 July and someone behind the bar shouts ‘take that f*****g fag outside’ after you happen to light up, don’t take it as a personal insult to you and a friend, they’re just worried about losing money.