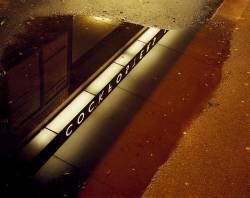 London Underground has an art programme called Platform for Art where new designs and artistic work are displayed around the city’s Tube stations.

Among the current run of exhibitions are Piccadilly’s Peccadilloes, a series of 12 new photographs commissioned specially for Heathrow Terminal 4 Tube station ticket hall, taken by German photographer Rut Blees Luxemburg of details of the front of 12 of the classic stations designed by Charles Holden. This is running until November 2007.

My Flag at Kingsbury Underground station is an exhibition of posters featuring a series of new flags symbolising cultures, languages, traditions and religions from across the world, produced by students from Kingsbury High school in collaboration with Tajender Sagoo, while The Waiting Room at Dagenham Heathway Underground station has work by students at Dagenham Park Community and Barking Abbey School with a waiting room as the starting point.

The programme for Platform Art is ever changing, check the TfL website if you ever see something that looks out of the ordinary on Tube walls, it might be a new exhibition.