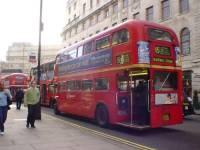 A website that you might find useful if you’ve travelled on public transport in and around London and haven’t found the service to be up to scratch is London Travel Watch, which is the official watchdog organisation tasked with looking after the interests of public transport users in London. It was set up in 2000 and is funded by the London Assembly which also appoints its members, and it says its independent of all the transport operating companies in the capital.

Its job is to push for better quality, performance and accessibility on public transport and they’ll also take up your case if you have a complaint against a bus, Tube, train or tram operator in London. They cannot get involved in any case you have until you’ve made an initial compliant to the company you travelled with, and either you got no answer or you’re not satisfied with the one you were given, in which case you can appeal to London Travel Watch and they can take up the case for you.

The website gives a list of links to addresses where you can make your first complaint against the bus, rail, Tube, DLR, Eurostar, tram and taxi companies and has a section of FAQ’s covering everything from how to claim compensation to explaining timetables.