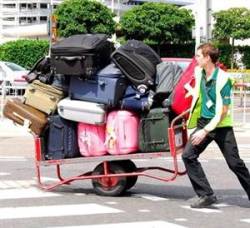 Not a good day publicity wise for British Airways after they were named the worst of 24 major European airlines for losing passengers baggage in 2006 in a report from the Air Transport Users Council(AUC). In their press release the AUC says, ‘According to the airlines’ own data, the major European network airlines mishandled over 5.6 million bags in 2006. This figure, however, relates only to the twenty-four airlines that are members of the Association of European Airlines.’

Airlines such as Ryanair and easyJet are not members and don’t release data on how much luggage goes missing from their flights. Virgin Atlantic and BMI are members but they also won’t release figures.

BA’s Director of Operations, Chris Want is quoted as saying ‘The number of bags per month we are handling at our Heathrow home has gone up by 25 per cent since the change in UK security regimes last August and this is reflected in higher numbers of delayed bags in the second half of the year when compared with the first half of 2006.
The volumes of hold baggage going through Heathrow, the change in security procedures and some baggage system failures within Terminal 4 has not helped our performance, but we accept that overall the levels of service we offered to our customers has not been up to an acceptable standard.’

Other airlines that had a worst than average loss of luggage included Lufthansa, Alitalia and Air France. The Montreal Convention covers airlines liability for lost baggage and states that a bag shall be considered lost after 21 days and but limits the amount payable to each customer at around £800.

The AUC says there’s not much passengers can do to make sure bags get put on the correct plane but there are a number of steps to take to minimise the effects if they do go astray.
1. Buy strong, good quality bags
2. Don’t over-pack bags, making them likey to burst
3. Pack valuables in hand luggage
4. Lock the bags
5. Make sure to label bags with contact details
6. Put contact details clearly visible inside the bag
7. Get travel insurance, and check that it covers personal baggage whilst in the
care of an airline.