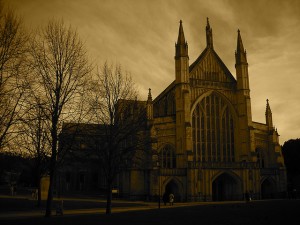 With such a great collection of accommodation in London, many tourists choose to extend their stay in the capital so they can explore the surrounding area by taking day trips from their London hotel. To enjoy the journey and miss the traffic, you can catch a train out to visit one of England’s most famous cathedral or university cities; enjoy a day at the seaside; explore one of Europe’s oldest forests; or see a 2,000-year-old Roman wall and gateway.

Journey time: Approximately 1 hour by train.
You can easily visit the attractive town of Colchester from Liverpool Street Station in London to take in 2,000-year-old Roman walls and the Balkerne Gate, which is the largest surviving Roman gateway in Britain. The town’s half-timbered houses, some complete with 17th century the bullet holes, add to Colchester’s charm, as does its Victorian architecture and the medieval Colchester Castle, the largest Norman Keep every built. Other popular attractions include Colchester Zoo and Colchester Castle.

The seaside resort of Brighton

Journey time: Approximately 1 hour by train.
This famous English seaside resort is a popular weekend getaway for Londoners because it’s so easy to reach from the capital. Getting from London to Brighton, from either London Victoria or London Bridge stations. Once a sleepy fishing village, today its pebble beach gets incredibly crowded during the Summer, yet the town still manages retains a bohemian charm and a laid-back atmosphere. Dubbed ‘Gay Capital of Britain’, the Kemptown area east of the centre caters well for the LGBT community while its trendy restaurants attract a wider clientèle.

Journey time: 35-40 minutes by train.
Hop on a train from Liverpool Street Station to the town of Chingford and when you get there you can walk about half a mile to reach Queen Elizabeth’s Hunting Lodge, originally built for King Henry VIII in 1543, and Epping Forest itself. This ancient woodland, once home to a hideout of highwayman Dick Turpin, has inspired novelists and attracted poets, artists and musicians for centuries –offering a complete escape from the chaos of London.

The famous university city of Cambridge

Journey time: Less than 1 hour by train.
Cambridge, one of England’s most famous university cities, can be reached from Kings Cross Station in London and is home to some fine Gothic architecture amongst the college’s many stately buildings. Soak up the scholarly atmosphere; take in the impressive view of King’s College Chapel from across the river Cam; and get up close to admire the intricate features of the city’s Gothic architecture.

The cathedral city of Winchester

Journey time: Approximately 1 hour by train.
This historical cathedral city perched on the edge of the South Downs can easily be reached by train from Waterloo Station in London. It grew up from a Roman town but today its top attraction is Winchester Cathedral itself, dating back to 1079. One of the film locations in the 2006 blockbuster movie The Da Vinci Code, the cathedral is the longest in Europe, with architectural features spanning the 11th-16th centuries. Ruined Wolvesey Castle is another famous landmark, dating from 1110 and once the Norman bishop’s palace.