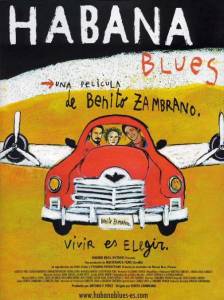 The Curzon Mayfair cinema is holding its Viva Film Festival starting this Sunday featuring some of the best Spanish and Latin films of the last couple of years. The Curzon Mayfair is in the southwest corner of Mayfair, just north of Piccadilly and east of Park Lane and the films in Viva Film will be shown on each of the next four Sundays, here’s what’s on the programme.

6 May – Habana Blues Benito Zambrano’s 2005 film about musicians struggling to survive in Havana. On at 2.45pm.

13 May – 7 Virgins This coming of age story about a group of teenagers in Seville topped the Spainsh box office charts in 2005 and helped the young cast pick up awards. 12 noon start.

13 – May Iluminados por el Fuego The first Argentian film to deal with the physical, psychological and political effects of the 1982 Falklands War with Britain. Won the 2006 Goya for Best Foreign Film (the Spanish Academy Award). Show starts at 1.45pm.

20 May – Un Franco, 14 Pesas Carlos Iglesias directs his first film, a comedy about Spanish people emigrating to northern Europe in the 1960s to find work. Begins at 2pm.

27 May – El Habitante Incierto Guillem Morales makes his debut film with a story of paranoia, hysteria and isolation when a young architect lets a stranger into his house who then vanishes. Programme starts at 12 noon.

27 May – El Violín A 2006 film, shot in black and white, about peasant farmers and musicians involved in a guerilla conflict. Starts at 2pm.