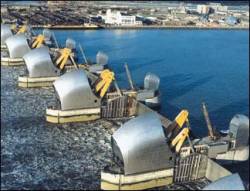 The River Thames snakes its way through the heart of London and is a tidal river for about half of its 200 mile length. It flows eastwards into the Thames Estuary and out into the North Sea and this makes areas along its course susceptible to floods, the Thames Barrier was built to protect London from the threat of serious flooding.

The last time central London was flooded was in 1928 when 14 people drowned, but it took until 1974 for construction of a flood control barrier to be started. The Thames Barrier is a series of ten separate movable gates positioned end-to-end across a 520m stretch of river, about 1.5 miles down stream from where the Millennium Dome is. The gates are pivoted and when they’re closed they seal off the upper part of the Thames from the sea. Construction was finished in 1982 and the barrier was first used a year later.

Global warming means low lying south and eastern England is under a considerable threat from floods and beside that the tide levels in the Thames Estuary have been rising by 60cm a century in relation to the land. The Thames Barrier particularly protects London from surge tides, which occur when low pressure coming across the Atlantic goes north of Scotland and pushes water from the deep ocean into the shallower North Sea. If this surge water meets a high spring tide (of which there are two a month) around the Thames Estuary, the flooding risk greatly increases.

Tides and surges can be predicted up to 36 hours in advance and the Thames Barrier can be closed in a matter of minutes although they usually allow a lot longer time to do it.
There’s a Thames Barrier Information and Learning Centre that is open to the public and has a working model of the Barrier and a video that shows its construction, operation and how flood protection works. There’s also a cafe and picnic area with great views of the barrier.

Admission is £2 and its open daily from 10.30am-4pm April-Sept, 11.30am-3.30pm Oct-March. Its located on the south bank of the Thames at Unity Way in Woolwich, the nearest rail station is Charlton about a one mile walk from the Thames Barrier. The closest Underground is North Greenwich by the Dome. Map