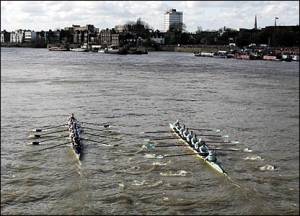 Saturday sees one of the most traditional annual sporting events that takes place in London, the Oxford v Cambridge University Boat Race. This years event is the 153rd edition of a race that was first held in 1829, so far Cambridge have won 78 and Oxford 73, there was one dead heat in 1877.

The Boat Race is contested between two coxed crews of eight over a 4 mile, 374yd stretch of the River Thames going East to West from Putney to Mortlake. It must be one of the most unusual rowing courses, on a tidal river with a huge horseshoe bend in the middle, getting a good start and maintaining a postion are vital to any crew that wants to win the Boat Race. The race is normally held one hour before high water at Putney and the intricasies of where the highest water levels and fastest part of the stream are, along with judging where the changing winds on the course will be, mean that the cox who’s doing the steering is as important as having a strong crew.

The Boat Race starts just to the West of Putney Bridge and finishes at Mortlake just before Chiswick Bridge, along the way it’ll also pass under Hammersmith and Barnes Bridges. The race always draws a huge crowd to both banks of the Thames and while you’ll have to get to some of the riverside pubs early to get a good spot the course is long enough to always be able to catch some of the action. 30 minutes before the main ‘blue’ race there’s a reserve crew race between the Isis boat of Oxford and the Goldie boat of Cambridge.

The Boat Race is no longer a contest between the well off sons of English gentlemen, this year Oxford’s crew includes 4 Americans, 1 Canadian, 1 Croatian and 1 Pole, while Cambridge feature 2 Canadians, 2 Germans and 1 American. Cambridge also have 5 of last year’s losing crew returning, so those guys should be fired up more than usual.

The Boat Race is on 7 April with the main race starting at 4.30pm. The weather forecast for Saturday is pretty good with temperatures around 20C(68F) and fairly light winds from the West, that should mean the chances of a boat sinking are down, its happened six times before.

The Oxford and Cambridge crews have always featured some of the world’s best rowers but among the famous names who’ve taken part is Hugh Laurie, the Emmy award winning actor from the Fox tv series House who rowed for Cambridge in 1980. You can watch the race live on the ITV website from 3.30pm(GMT)