The beach at the O2 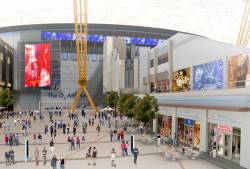 The O2 Arena is the old Millennium Dome converted into an entertainment complex with bars, restaurants, cinemas, a 27,000 seat indoor sports and music venue, and for the next seven weeks a beach.

The O2 have brought in 1,000 tons of sand to transform its Piazza section into a 20 metre diameter size beach with an illuminated imitation sun and moon, and surrounding palm trees. During the day it will be a kids play area with entertainers on hand to tell stories and help the kids have a good time.

In the evening the O2 want the area to become an after-work destination with volleyball and other sports on Mondays, cult film screenings on Wednesdays and Sundays, DJs playing on Thursdays and Fridays, and live music on Saturdays. The beach will also have a bar.

The O2 beach is open from 10am-10pm from now until 27 August and is free to come along to. The O2 is at the north of the Greenwich penisula, just east of the Blackwall Tunnel. The nearest Underground station is North Greenwich on the Jubilee Line. Map