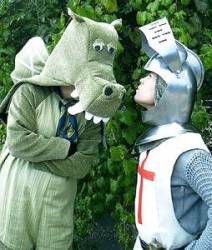 April 23 is St George’s Day, the patron saint of England, and from 21-23 April there are a number of events in London celebrating the day. Most English people would probably be surprised to learn that St George is the saint not only of England but places as varied as Catalonia, Ethiopia, Greece, Serbia and many more countries as well as cities such as Istanbul and Moscow.

If you asked the majority kids about St George they’d most likely say he was the knight with the red cross on a white tunic who slayed a dragon to save a maiden. In fact he was a Roman soldier born in Turkey in the 3rd century whose family was Christian. He rose to a high military rank but then protested Roman persecution of Christians and was tortured and beheaded at Lydda in Palestine.

He was made popular in England by returning Crusader Knights in the 11th century who said they’d seen a vision of him in white robes with a red cross at the siege of Antioch. He became the official patron saint of England after Henry V’s victory at Agincourt in 1425.

Commemorating St George’s Day has been controversial over the last 30 years with the liberal/politically correct media and political groups in Britain nervous about white English people
waving their national flag and potentially causing immigrants to have nervous breakdowns.

St George’s day events this weekend start on 21 April with a parade to the Cenotaph in Whitehall organised by the Royal Society of Saint George. At the Cenotaph they’ll be a short service, a wreath laying and a march past. Events start at 10.30am.

In Covent garden on 21 April from 10.30am-5.30pm there’s a Festival for St George which includes performances by the English Folk Song and Dance Society, Band of London Yeomanry, Moulton Morris and the Jive Aces, plus Punch and Judy and Mummers Plays. Admission is free.

City Hall is also hosting a photographic exhibition until 25 April featuring portraits of leading British comedians past and present.