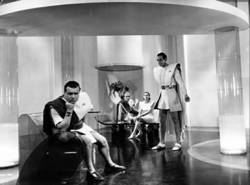 Sci-Fi London is the 6th Annual International Festival of Science Fiction and Fantastic Film taking place at the Apollo West End cinema just off Piccadilly Circus from 2-6 May 2007.

Among the features is a fully restored version of the influential 1936 British film Things To Come about a world war that lasts to 2035 and is renowned for its design which features versions of plasma screens, mobile phones and other gadgets that are today’s reality, and the premiere of the British/Indian film Exitz starring Malcolm McDowell as a billionaire computer games tycoon who creates a new game featuring real people.

There’s a short film programme on 5-6 May and three all nighter programmes, anime, Mystery Science Theater 3000 and Hammer Classics on 5 May all starting at midnight. There are many more films and other events include an evening with director John Landis where he talks about his career and work, this is free to attend, the Douglas Adams Memorial Debate, a free Sci-Fi pub quiz and the Sci-Fi Film School where you can learn the best way to add effects to your own DV movies.

Tickets for feature films are £9.50, shorts programmes, documentaries, classics and debates are £7, the Sci-Fi film school is £10 and the All Nighters are £24. The Apollo West End is on Lower Regent Street just south of Piccadilly Circus.