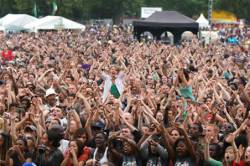 An event sure to attract tens of thousands of people in London this coming weekend is the free music festival Rise:London United Against Racism taking place in Finsbury Park north London on Sunday 15 July.

Rise has a huge number of acts and bands performing on seven different stages covering hip-hop, indie, pop, jazz, reggae, Latin, African and Asian music. On the main Rise Stage are Kelis, Jamelia, The Holloways and St. Etienne among others. There’s an African Village with African food, drink, arts and crafts and a music stage. Big Cuba Fiesta and el Barrio Latino has salsa and merengue bands, Latin American DJ-ing and salsa dance classes, the Crescent Stage features Turkish, Kurdish and Berber music, Middle East pop, desert music and dance by Kurdish and Sufi groups, and the Mela Stage has a lineup of acts playing traditional and contemporary Asian music including Bhangra and Asian Fusion. The Underground Stage has some of the top up and coming British Urban acts and the Comedy tent presents some of the best comedians in London.

Performances on the Rise Stage run from 12 noon to around 9pm, on the other stages its generally from 12 noon until 7pm. Finsbury Park is easy to get to, either on the Piccadilly or Victoria Tubes, or on the First Connect train from Kings Cross. Walk out of the station, go round the corner past the Twelve Pins pub and you’ll find the entrance to the park and Rise is being staged at that southern end of it.