On the Da Vinci Code Trail in London 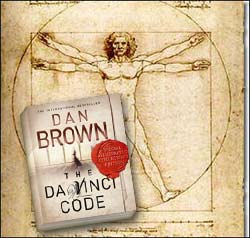 Eurostar is crediting the popularity of the book and movie, The Da Vinci Code, with helping to push its profits way up last year. I haven’t read or seen it but apparently lots of the story takes place in London and Paris and fans have been making trips between both to trace the trail of the story.

The main areas the book deals with in London are Fleet Street, the former centre of the newspaper industry in Britain up until the late 1980s. If you want to start your look at Fleet Street from its eastern end, either take the Tube to St Paul’s and walk down Ludgate Hill or get off the Circle Line at Blackfriars and walk north from the river to the top of Fleet Street.

Temple Church is just off of Fleet Street, close to Temple Bar where the griffin stands on top of a pillar in the middle of the road. Built in the 12th century by the Knights Templar, their website says they get a steady stream of Da Vinci Code fans.

Kings College is the next location to visit. Kings has five main campuses in central London and other buildings throughout the city. If you carry on walking west along Fleet Street it becomes The Strand and Kings College’s Strand Campus is next to Somerset House, just before you get to Waterloo Bridge. Apparently in the book they find a new clue to the code in the library there.

From Kings College continue west along the Strand and you’ll come to Trafalgar Square. In the southwest corner you ‘ll see the imposing Admiralty Arch, through which the Mall leads to Buckingham Palace. Walk through the Arch and on your left hand side will be Horse Guards Parade and St James’s Park where one of the book’s characters gets bumped off.

Finally if you walk south down Horse Guards Road and take a left on Great George Street you’ll come out in Parliament Square and see Westminster Abbey on the other side. The Abbey is a key location in the book and contains Sir Issac Newton’s tomb, which the story involves.
The London HQ for the Catholic group Opus Dei is in Bayswater, west London, but its not open to the public.

Following the Da Vinci Code in London will give a compact little tour of the centre of the city. If you’re thinking of following the trail don’t forget to get your hostels and plane tickets with Bootsnall to save money for the Eurostar and Paris leg.