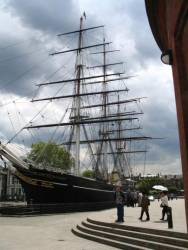 The ship was closed to visitors in November 2006 for essential restoration work on the wrought iron framework and timber planking of the hull, its due to reopen in late 2008. In the meantime a new visitors pavilion has been built next to the Cutty Sark and has opened this April. In it you can learn about the conservation techniques and plans for the ship, see how the conservation project works and find out about the history of the Cutty Sark.

They’ve installed cctv on the ship so you can view the restoration work being carried out live and there’s a mini cinema with a new film of the Cutty Sark as a working vessel. There are also tea sampling sessions so you’ll get a taste of what she carried around the world.

The visitors centre is now open from 11am-5pm, 7 days a week and admission costs £5 adults, £3.70 children, all the fees taken go the conservation project. (It will be closed 22 April because the London Marathon goes right alongside the ship).