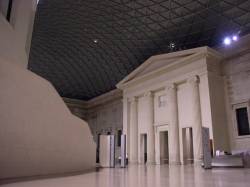 If you’re out and about in central London at night and are looking for something to do for an hour or two for free, take advantage of the late openings of some of London’s major museum’s.
Here are a few of the ones that have extended openings.

Victoria and Albert Museum The V&A in South Kensington stays open until 10pm on Friday nights exhibiting art and design from down the centuries and from all over the world. Admission is free but there may be a charge for special exhibitions.

The British Museum The amazing looking Great Court is open until 11pm Thursday, Friday, Saturday. The galleries are open until 8.30pm Thursday and Friday (5.30pm the rest of the week). It collections human history and culture from the last few thousand years.

The National Gallery Located on the north side of Trafalgar Square housing the UK’s national collection of paintings, the gallery is open until 9pm on Wednesday. An ideal place to drop into for a short visit.

The National Portrait Gallery Just around the corner from the National Gallery, the NPG holds a collection of portrait paintings, photographs and sculptures of important British historical figures. It stays open until 9pm on Thursday and Friday nights, handy if you’re in Leicester Square close by.

The Royal Academy of Arts On Piccadilly between Piccadilly Circus and Green Park, the Academy galleries and restaurant are open until 10pm on Friday nights.

Tate Modern Now in the huge converted Bankside power station on the south bank of the Thames between Southwark and Blackfriars bridges. Its open until 10pm on Friday and Saturday nights on the lively south bank.

Tate Britain The parent museum to Tate Modern is along Millbank, south of the Houses of Parliament and has a collection of historic and contemporary British art. It stays open until 10pm on the first Friday of each month.