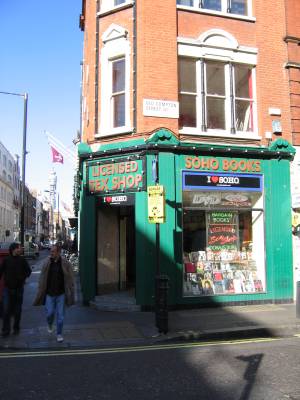 London doesn’t really have a red light district on the scale of Amsterdam or parts of Germany, Soho was always the nearest London got, sleazy, slighty edgy, the place where punters from the sticks or young lads would walk into a strip joint and find themselves agreeing to pay £50 for a watered down drink or some meathead would brake their arm.

Westminster Council got tough with the licencing laws in the 1980’s and walking around Soho today there’s not a great deal of the sex industry left, at least on the surface. A few book and film stores, some peep shows and strip clubs but if you take the wrong street you’ll miss them.

Now Soho’s more about trendy little clothes and coffee shops, restaurants, being able to get a table outside a bar in summer and generally trying to look cool and fashionable.

Soho is the area south of Oxford Street, between Regent Street and Charing Cross Road and north of Shatsbury Avenue. It’s always been a centre of entertainment in London going back to the 17th century and the streets here are fairly narrow with most of the buildings being at least four storey’s high and gives the place an atmosphere when its full of people especially at night. 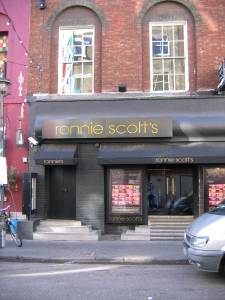 Close to the Shaftsbury Avenue side of Soho is Old Compton Street, one of the busiest parts of the area at night. It’s known as a gay part of central London but not all the pubs and bars there are aimed at the gay market. Right off Old Compton Street just as you turn up Frith Street are two of Soho’s most well known places, Ronnie Scotts and Bar Italia.

Ronnie Scott’s was first opened in 1959 by the saxophonist of the same name just over Shaftsbury Avenue in Gerrard Street. He moved his club to its current location in 1965 and was reknowned for having all the greatest jazz musicians of whatever period play there since. Ronnie Scott died in 1996 but the club goes on.

Across the Street from Ronnie Scott’s is Bar Italia, an atmospheric 24 hour Italian coffee bar that is a centre for Italians in London especially when there’s football, Serie A or World Cup on. After they beat France to win the World Cup in 2006 there were more than 3,000 people outside going absolutely bananas.
The shop iteslf is in a famous location, in a room above John Logie Baird first demonstrated television and Mozart lived next door for a couple of years when he was a child. 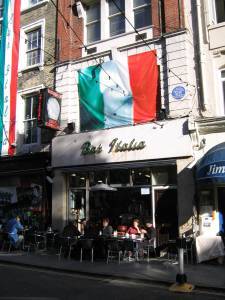 Carry on walking up Frith Street and you’ll come to Soho Square with a small gated shady park in its centre. If you wanted to grab a sandwich in one of the shops lower down in Soho and eat it somewhere quieter this would do fine, there are benches to sit on all around but I think in summer a lot of people from the surrounding offices have the same idea.

In the middle of Soho running north/south is Berwick Street and here there’s a street market everyday and has been since the 1840’s. If you want some fresh fruit or some odd clothing to start your own style try the stalls or shops along here. At the end of it you’ll find a narrow area with some peep shows.

Soho along with the Leicester Square area and Covent Garden forms one big entertainment area at night, especially weekends and its easy and relatively safe to walk between all three. I don’t know if its a case of the freaks come out at night in Soho but you’ll see some interesting characters walking around.