London’s gorillas get a new hangout 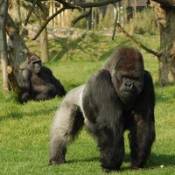 The gorillas at London Zoo could be the new star attractions after settling in to their new £5million 6500 sq.m enclosure. Its taken the Zoo 18 months to build and features caves, waterfalls, an indoor day gym and heated rocks.

Its the biggest investment at London Zoo in nearly 40 years and allows the western lowland gorillas to really move around outside for the first time. A huge moat around the enclosure also allows visitors to get a close and uninterrupted view of the gorillas, one section has only a sheet of glass seperating people and gorillas. The western lowland gorilla comes from West and Central Africa and I’m not sure how they’ll like being outside in the changeable British climate although when you weigh 600lbs there must be a certain amount of body fat there.

Apparently gorillas in zoo’s can live up to 45 years, London’s range from around 14-33 at the moment so should be around for a while. If you feel like checking out the gorillas or the rest of the animals London Zoo is located on the north side of Regent’s Park within easy reach of central London. Its open daily from 10-5.30pm and tickets for adults are £14.55.