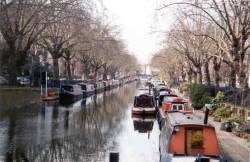 Many visitors may not realise that there are miles of canals snaking their way through London and that a lot of people have given up living in a house for life on one of the narrow boats that slowly cruise the canals.

This coming weekend there’s a chance to get a glimpse of what canal life’s like when the Inland Waterways Association organises the 24th annual Canalway Cavalcade which combines a boat rally with a trade show and a wide range of activities and entertainments. The event happens at Little Venice in the Maida Vale area of West London, just to the north of Paddington Station, the place where the Grand Union Canal and the Regent’s Canal meet.

Hundreds of narrow boats, cruisers and other river craft will be taking part and events include an opening ceremony at 2pm on Saturday 5 May followed by the Pageant of Decorated Boats that afternoon, the Procession of Illuminated Boats on the evening of 6 May and a boat-handling competition on the 6-7 May. There’s a Trade & Craft Show, musical and theatre entertainment, as well as stuff for kids including a Teddy Bears’ Picnic and a Puppet Theatre Barge.

The Canalway Cavalacade site at Little Venice is open to the public from 10am-7pm Sat-Sun, 10am-6pm Monday and admission is free. Little Venice is just on the north side of the Westway, there’s direct access from Paddington Station.