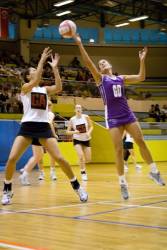 Netball is one of the top women’s team sports in the UK, Australia, New Zealand, South Africa and many other Commonwealth countries, a seven-a-side game played over 15 minute quarters. Traditionally in British schools when the boys play football the girls go off and play netball, although more girls are now getting the chance to play football.

This week there’s the chance to see some top level netball when a four team international series takes place at Earl’s Court on Thursday 17 May. The England women’s national team take on Australia, the former world champions and that game is preceded by the current world champs New Zealand taking on an England A team. These games are part of the preparation for the 2007 World Championships taking place in Auckland, New Zealand in November.

Tickets for the Earl’s Court event are £22.50, the England A v New Zealand game starts at 5.30pm and England v Australia starts at 7.45pm. I’d imagine they’ll be a good atmosphere with plenty of support from the Aussie and Kiwi expats in London, and if you like fit young women in short skirts getting a sweat on maybe you’ll enjoy and evening of netball. Earl’s Court on the Piccadilly and District lines is the nearest Tube station.