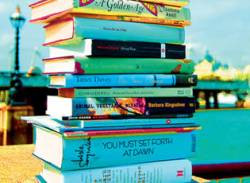 Two of the main themes of this year’s festival are Metropolitan Lines which focuses on London as a subject and setting for novels and poetry, and has authors and poets including Sean Borodale, Iain Sinclair, Tobias Hill, Blake Morrison and Janet Davey reading from and discussing their work, and Saying the Unsayable examines freedom of expression and the boundaries of offence, and authors, historians and comedians will be talking about this subject at various events.

The festival is on at a number of venues in the Southbank Centre complex including the Queen Elizabeth Hall, the Royal Festival Hall and Purcell Room and almost 40 events are scheduled for the two weeks, some of which are free, others which require tickets costing between £7-£9.

Foyles are the official festival bookseller and have a special bookstall which is open in the Queen Elizabeth Hall Foyer from 10am-late offering books by authors appearing at the festival. You can also get 10% off your purchase with your ticket to any London Literature Festival event.