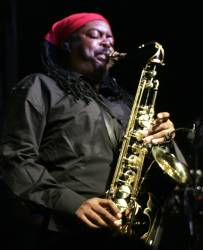 Music magazine Jazzwise is celebrating its tenth anniversary with a week of gigs in the Jazzwise 10th Birthday Festival at the Pizza Express Jazz Club on Dean Street in Soho.

The festival runs from 26-31 March and features established jazz artists along with some of the best up and coming British and European jazz musicians and bands. The lineup for the week is as follows.

26 March – Stan Tracey Octet Veteran pianist Stan Tracey, called the Godfather of British jazz, open sthe festival with his 8 piece band. The show starts at 7.30pm with tickets £18.
27 March – Polar Bear + em This Mercury music prize nominated quintet is one of the hot jazz acts of the moment, supported by German based group em with their hip-hop-drum’n’bass influenced jazz. 7.30pm, tickets cost £20.
28 March – Courtney Pine Band + Empirical Saxophonist Courtney Pine is one of the most well known jazz musicians in the UK and is supported here by trumpeter Jay Phelps’s band Empirical. Another 7.30pm start with tickets going up to £35 for this show.
29 March – Claire Martin and Ian Shaw + guests Two of the UK’s top jazz singers get together for this special festival appearance. 7.30pm and £20.
30 March – Nucleus Revisited – tribute to Ian Carr British trumpeter Ian Carr has been a major figure in British jazz for over 40 years. His group Nucleus have reformed for this special tribute evening. The show begins at 7.30pm, tickets £20.
31 March – A Night with Dune – Gary Crosby’s Nu Troop and guests Bass player Gary Crosby started Dune records ten years ago, this show to end the Jazzwise festival features past and present Dune artists. 7.30pm and £20.

The Pizza Express Jazz Club is at 10 Dean Street just down from Oxford Street, the nearest Tube is Tottenham Court Road.