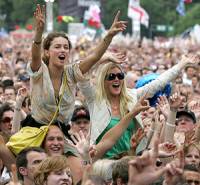 After this weekend’s Wireless Festival London’s Hyde Park has another big weekend on the 23-24 June when it hosts Hyde Park Calling, two days of music on three stages.

Each day features over 15 acts on the three stages. On 23 June Peter Gabriel and Crowded House headline the Main Stage while, the Pepsi stage is headed by artists from the Buena Vista Social Club. On the 24 June Aerosmith are the big act on the Main Stage, their first UK gig for eight years, along with Chris Cornell and Joe Satriani tops the Pepsi Stage bill.

Gates for Hyde Park Calling open at 2pm and the show ends each night around 10.15pm. Tickets cost £45 for a one day ticket or £80 for a weekend one. Marble Arch and Hyde Park Corner are the nearest Tubes.