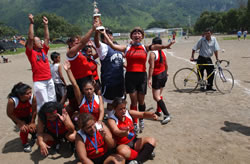 Human Rights Watch organizes a number of film festivals around the world including ones in New York, San Francisco and Toronto. Their annual London festival is on this year from 21-29 March and features over 20 feature films, short films and documentaries which will be shown at The Ritzy cinema in Brixton, the ICA in the Mall, the Clapham Picturehouse, the Gate Cinema in Notting Hill, the Greenwich Picturehouse and the Renoir cinema in Bloomsbury. Some of the films will be shown at more than one cinema.

Human Rights Watch screens over 500 films in the process of selecting the ones to be shown in their festival and they view films by new and established filmmakers. They say once a film has been selected their staff will view it to make sure the human rights concerns expressed in the film are accurate.

Among the interesting sounding films to be shown are The Railroad All-Stars, a Spanish/Guatemalan documentary about a group of prostitutes in Guatemala City who form a football team to draw attention to their situation, The Lives of Others, a German film set in Berlin in the 1980s about the power of the East German secret police and government. It was nominated for an Oscar as Best Foreign Language Film in 2007. When The Levees Broke is Spike Lee’s documentary on Hurricane Katrina and the effort or lack of it to look after the people of New Orleans. This is a long film, 240 minutes. Why We Fight is a Sundance Film Festival winning documentary looking at the US military industry and the wars fought over the last 40 years. Ghosts of Abu Ghraib features interviews with Americans and Iraqis involved with the torture of prisoners at the Baghdad prison.

The festival opens with a benefit gala on 21 March at the Curzon Mayfair Cinema and a showing of the film Mon Colonel by director Costas-Gavras.