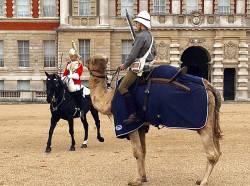 Tickets are available for the pageant which starts at 7pm and includes an inspection of The Queen’s Life Guard by The Queen followed by the official opening of the Museum, live historical re-enactments including the Coronation Procession of King Charles II, a cavalry charge at Waterloo and the Liberation of Brussels, 220 horses and men, music from the Mounted Bands of The Life Guards and The Blues and Royals, 50 historic and contemporary armoured vehicles and a camel. They’ll be mounted ceremonial and cavalry drills not seen since 1939 and a drive-past of modern armoured reconnaissance vehicles. Commentary will be provided by Dame Judi Dench (M in James Bond), former Defence Secretary Michael Portillo and actor Stephen Fry.

This is a one off event and money raised will help finance the relocation of the Household Cavalry Museum from Combermere Barracks in Windsor to its new premises in the Horse Guards building. The museum, which has cost more than £4 million, will contain a collection of uniforms, silver, documents and memorabilia, and will feature a glass wall allowing visitors to view The Queen’s Life Guard stables which are still in daily use.

You can get to Horse Guards Parade either from Whitehall or going to the eastern end of St James’s Park. Westminster and Charing Cross are the nearest Tubes.