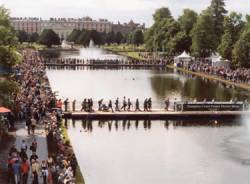 Hampton Court is the former royal palace about 10 miles to the southwest of central London, close to the River Thames about 2 miles from Teddington. There’s been a house on the site since the 14th century which has been remodelled and added to over the centuries to produce the palace of today and Hampton Court was used by English monarchs from Henry VIII to Queen Victoria, who eventually opened it to the public.

Today the palace is open seven days a week from 10am-6pm for visitors to see the state rooms and apartments, Henry VIII’s Great Hall, Tudor Kitchens, the famous maze and many other attractions, but also this week its hosting the annual RHS Hampton Court Flower Show, the largest in the world.

The show is on from 3-8 July, although the first two days are for Royal Horticultural Society members only, and is open from 10am-7.30pm. It features over 50 show gardens, water gardens, small gardens and conceptual gardens, four large floral marquees featuring 100 of the best nurseries exhibiting their plants, 30 nursery stands where you can buy plants, a Festival of Roses, a Plant Heritage Marquee and a Growing and Showing Marquee.

You can buy a combined ticket to visit both the Flower Show and Hampton Court Palace either as a fullday or halfday ticket. If you’re coming from central London, SouthWest trains run direct from Waterloo Station taking about 35 minutes and the palace is around 200m from the station.