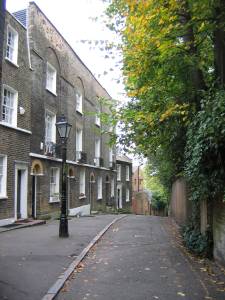 Hampstead is a suburban part of London about 4 miles north of the West End. It’s buildings are mainly Georgian, large four and five storey town houses on some of the main roads, smaller one’s on some of the narrow roads that wind off of Heath Street, the main street through Hampstead village.

Walking around the area its clear that this is one of the wealthier and more fashionable parts of London. The High Street and Heath Street both have plenty of trendy little restaurants and boutique shops and there are quite a few narrow, pedestrianised streets you can look down to find one off individual shops.

One clue to how much money is in the area is the number of estate agents there are. It’s got to be close to a couple of dozen, in parts of Heath Street every second shop is selling or renting property.

Hampstead underground is on the Northern Line and the station is at the junction of Heath and the High Street. If you come out of the station and turn right you’ll be walking up hill towards the west side of Hampstead Heath and Jack Straw’s Castle, nothing to do with the home of Tony Blair’s former foreign secretary, but a famous pub originally built in 1721. 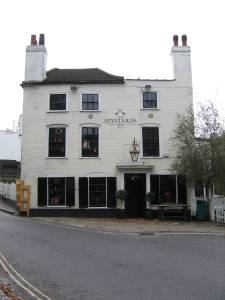 Jack Straw’s Castle is at the corner of Heath Street and Spaniard’s Road and if you take a right turn down Spaniard’s Road about half a mile on the left hand side is the Spaniards Inn, dating from 1585 and supposedly where the highwayman Dick Turpin hungout in between shouting stand and deliver. He stabled his horse, Black Bess, in Kenwood stables which is just across the road in Hampstead Heath. The Spaniards Inn was also a place used by the poet’s Shelley, Keats and Byron in their time.

An immediate left out of Hampstead station takes you down Hampstead High Street which is a fairly busy stretch of coffee shops, restaurants, clothes and some designer fashion shops. There are some large, impresssive town houses along here and the high street turns into Rosslyn Hill. You’ll see two large churches at the junction with Pond Street and if you turn left here and go down the hill, quickly on your left will be the Royal Free Hospital, one of the most well known in England and a little further down Hampstead Heath train station and a parade of shops similar to that of the village. 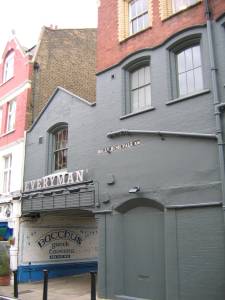 Directly across from Hampstead station is one of the most unique cinema’s in London the Everyman. First opened in 1933, if you like your cinema experience to include sitting in a sofa, with a bottle of wine in a bucket of ice next to you, then catch a film at the Everyman. They also have private screening rooms if listening to fellow film goer’s puts you off. Currently showing The Devil Wears Prada, Marie Antoinette and Borat.

One street up from the Everyman is Holly Hill, this leads you up to an area of winding, narrow residental streets full of very well looked after town houses. Along this road is Fenton House a National Trust maintained 17th century counrty house with a collcetion of European, Oriental and English porcelain and a collection of early keyboard instruments.

Hampstead village is a nice place to come and spend a few hours browsing around some interesting smaller shops before taking a break in one of the many good pubs, then going to get yourself a nice lunch that will set you up for a turn around Hampstead Heath.