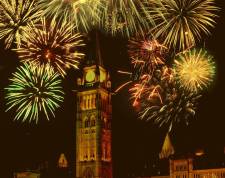 November 5 is the annual Guy Fawkes Night celebration in Britain (also known as Bonfire Night), when up and down the country you’ll see and hear fireworks being fired off all night at both large public displays and private homes.

It marks the foiling of the Gunpowder Plot of November 5 1605 when a group of Catholics tried to blow up the Houses of Parliament when the Protestant King James I and his family were in the building. Guy Fawkes and the other plotters were brutally tortured and executed and Fawkes’s effigy has traditionally been burnt on top of large bonfires ever since. Health and safety laws and Britain’s nanny state mean that less people have big fireworks shows at their own homes these days and the tendency over recent years has been for large organised displays in public parks and open areas, and not necessarily on the 5th November but on the weekend closest to it. Below are some of the biggest fireworks displays open to the public in London this year.

2 November – Clapham Common One of three free events put on by Lambeth Council on the same night, the others being at Brockwell Park and Streatham Common, the fireworks at Clapham Common should be some of the biggest around and start at 7.30pm. Nearest Tubes Clapham North or Clapham South. Map

3 November – Alexandra Palace Perched on a hilltop in North London with good views all around, this fireworks show starts at 7.30pm in the surrounding park but before then there are funfairs and a Jazz, Beer & Food Festival from 4.30pm-10pm. Nearest Tube Wood Green or Alexandra Palace on the mainline rail from Kings Cross. Map

3 November – Battersea Park Wandsworth Council expects 55,000 people to turn up for this show. Gates open at 6pm, the bonfire is lit at 7.30pm and the fireworks start at 8pm. Tickets are £5 adults, £1 under10s. The park runs along the south bank of the Thames between Albert and Chelsea bridges, the nearest Tubes are Vauxhall or Sloane Square on the north side of the river. Map

3 November – Blackheath The show at Blackheath is usually a big one drawing a crowd of around 40,000. This year’s event starts at 8pm, entry is free. Blackheath is to the south of Greenwich Park. Map

5 November – Southwark Taking place at the Greenland Dock in Rotherhithe this event is free with entertainment starting at 6pm and the fireworks beginning at 7.30pm. Map

There are many more events all around London. To find one near you try the Firework Finder website for details.