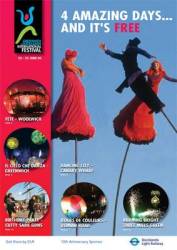 The Greenwich and Docklands International Festival is an annual showcase in London for some of the world’s most spectacular street theatre, music and dance. Its on from 21-24 June at various locations in the East End and along the Thames and features performers from France, Spain and Argentina among others. All events are free, here’s the lineup starting this Thursday.

22 June – K@osmos Grupo Puja are a Spanish/Argentine group and their show K@osmos has a team of eight aerialists and bungee performers suspended on a spherical steel frame which is raised by crane and accompanied by live musicians. It takes place in the spectacular setting of the lit grounds of the Old Royal Naval College along the banks of the River Thames in Greenwich and starts at 9.45pm, finishing approximately at 10.45pm. Gates will open at 9pm and capacity is limited to 5,000.

23 June – Mirage This is the London premiere of one of France’s leading outdoor companies, Oposito, whose show Mirage..Les Trottoirs de Jo’burg has a cast of 40 performers and evokes the landscapes, sounds and visions of Africa inspired by the company’s travels in Ethiopia and South Africa. This visually breathtaking show with an extraordinary caravan of mechanical camels will start at Mile End Park in the East End and move around the streets and parks of Bow. Starts at 9.30pm.

24 June – Out of the Blue Outdoor theatre taking place inside the huge O2 Arena, formerly the Millennium Dome in Greenwich. Acts taking part include Factoria Mascara with their dynamic and sexy choreography in a pool of water, Strange Fruit’s entrancing sway pole courtship ritual The Field, Plasticiens Volants with their giant floating sea creatures towering over the heads of audiences, Aeroplume who create a stunning spectacle with their helium filled zeppelin and a newly commissioned show from Wired Aerial Theatre, featuring bungee choreography using the full height of the O2’s interior. Out of the Blue is on from 1pm-6pm and its a good chance to see inside the renovated O2 Arena.

24 June – Mass Carib An outdoor music theatre performance by Nitro, one of Britain’s leading Black theatre companies, to mark the 200th anniversary of the abolition of the transatlantic slave trade, staged against the background of the Old Royal Naval College, Greenwich. Gates open at 9pm and capacity is limited to 5,000.