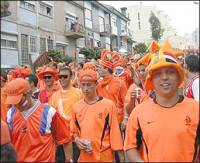 Queen’s Day or Koninginnedag is a national holiday in the Netherlands and there’s a celebration of it in London this weekend. Officially Queen’s Day is on 30 April but the London Holland House event is taking place on Saturday 28 April at the Bernie Spain Gardens, next to the Oxo Tower Wharf on the south bank of the Thames.

The day starts at 11am and there are activities for all the family including a Dutch market, live music, Dutch food and drinks and a kid’s corner featuring clog painting, face painting and games. There’s a Silent Disco where only people wearing headphones can hear the tunes a DJ is playing, the best dancer of the day will win a City Break for 2 in Holland, and there are other competitions through the day with prizes including a £4,000 diamond and other trips to Holland.

The day’s events run until 10pm and from 10pm onwards famous Dutch DJ’s will be playing at the seOne club in London Bridge. The Oxo Tower Wharf and Bernie Spain Gardens are between Waterloo and Blackfriars bridges on the south bank, the nearest stations are Waterloo or Southwark.