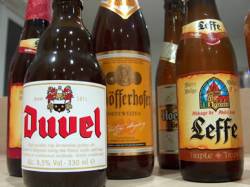 If you’re interested in expanding your knowledge and choice of alcoholic drink past the staple pint of lager, you might like to check out some free tastings going on this month at The Hide Bar in Bermondsey, just south of the Thames between London and Tower Bridges.

The Hide Bar is on the ground floor of the International Wine & Spirit Centre and has a huge selection of wines to choose from, over 150, locally brewed beer from the Meantime Brewery in Greenwich, 250 different spirits and can make just about any cocktail you can think of.

In March they’re holding a series of free tastings starting on 6th March when you can sample Riojas from Alvaro Palacios Rioja, followed by a talk and tasting on the 13th March of Cachaca, a rum like drink from Brazil and Caipirinha, Brazil’s national cocktail in which Cachaca is the main ingredient.

On 20th March a representative of Belgium brewer Duvel will be talking about their products and there are free samples of their Duvel and Vedett beers. On the 27th March The Hide Bar’s own staff will be explaining all about the Sazerac, one of the oldest cocktails, invented in the 1850s in New Orleans and made with a mixture of cognacs and bitters.

The Hide Bar is open 8am-midnight(Mon-Tues), 8am-1am(Wed-Thurs), 8am-2am(Fri) and 4pm-2am(Sat). They also have free Wi-Fi and rooms available for meetings.