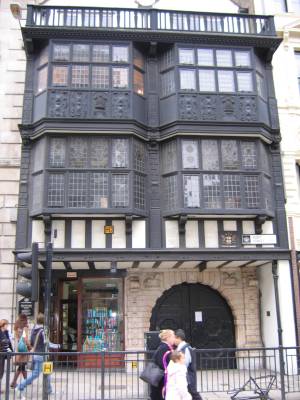 Fleet Street’s been associated with the printing industry for over 500 years. Publishing started there in 1500 when an apprentice of William Caxton moved his printing presses to premises on Shoe Lane, off the left side of Fleet Street as you face St Paul’s, and over the year’s more and more printers and publisher’s moved in.

The world’s first daily newspaper started here when The Daily Courant began publishing in 1702, other’s followed and Fleet Street appealed to journalists because of it’s position halfway between the centre of politics at Westminster and the centre of commerce in The City.
Since the newspaper industry moved out in the last 20 years many of their former buildings have been taken over by people in the law and banking industry’s.

One thing the journalists and newspaper people were famous for was their drinking and the bars and pubs in the Fleet Street area all did a great business. When I was working around there for a while in the 1980’s, pretty much every lunchtime would involve dropping in a pub for a few pints and there was one pub we used off the north side of Fleet Street that would be packed by 12pm and had a disco floor flashing. Knocking back three pints in your lunch hour didn’t help the afternoon go any quicker.

Since printing and publishing started in Fleet Street its attracted some of the most famous writer’s in British history who’ve drank in the pubs and taverns around there. Shakespeare, Samuel Pepys, Dr Johnson, Charles Dickens and even American Mark Twain have frequented places like the Mitre Tavern, which is now 37 Fleet Street and Ye Olde Cheshire Cheese which is still going strong today. 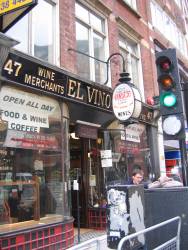 One of the most famous hangout’s for journalists was El Vino wine bar which is still open today. They were started by Alfred Bower in the City of London in 1879 as a wine merchants. His tasting room soon changed into a wine bar and he opened other locations including Fleet Street. In 1915 he ran for alderman but was told he couldn’t have a business in his own name and changed Bower & Co to El Vino.

El Vino was incredilbly popular with newspaper people and they had a strict policy about serving women at the bar and had a dress code that required a jacket and tie. That’s all changed and anyone can get served and you can wear what you want.
One ‘house rule’ they do maintain is that they won’t serve or sell any wine the director’s haven’t tasted and consider ready to drink.

On the same side of the street as El Vino but further east is one of the most well known churches in London, St Bride’s. It’s set back from the road, hidden behind modern buildings and its quite easy to walk past the alley leading into it without realising its there.

St Bride’s is known as the Journalist’s Church or Printer’s Cathedral and it’s still the place were journalists hold memorial services for colleague’s who’ve died and there are plaques on the walls commemorating many of them. 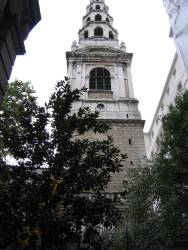 There have been building’s on the site for 2000 years and a church there for the last 1500 years. The current one was built by Sir Christopher Wren after the Great Fire of London destroyed the previous church in 1666, Wren’s church has a layered spire that millions of wedding cakes have been based on.

The church gets its name from St Bridgit of Kildare(where my Dad comes from) and there’s a poem she wrote whose first line could have come straight out of my head,

Not surprisingly St Bride’s has had a relationship with a lot of the famous people who’ve been involved with Fleet Street of the years. There’s an original Roman floor in the crypts, the poet John Milton lived in the churchyard(it looks like the odd wino might make their home there now but I don’t know if they’re poets), Samuel Pepy’s was baptised there and Charles Dickens and Dr Johnson lived close by.
Also the parents of the first European child born in Colonial America were married here in the 16th century. It’s still a working church and there’s Holy Communion twice a day, every day.

If your near St Paul’s or the Aldwych end of the Strand take a walk down to Fleet Street a have a look at what used to be one of the most important streets in London.