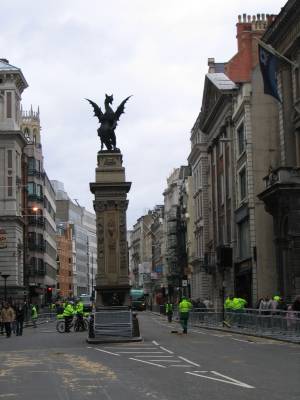 Fleet Street is one of the most well known London street names. People all over the UK who’ve never been to the capital will have heard of Fleet Street and known what it meant.
For over 200 years it was the centre of the newspaper industry in Britain and the name was and still is synonymous with journalism.

I had my first job at a features agency based in Fleet Street in the mid 80’s, just before the newspaper industry was to go through a huge change in how they did business and at the time the place was incredibly busy.

All the major British daily newspapers were produced and printed in or just off Fleet Street and some of the papers occupied really imposing buildings such as the Daily Telegraph. Their offices were No.141, the grey stone building with massive column’s and a big blue clock in the front.
I’m still amazed at how the long trucks carrying the huge rolls of newsprint ever made it down some of these narrow side streets to unload into the printworks, it must have been a nightmare for the drivers.

Fleet Street runs east/west, parallel with the Thames from Ludgate Hill in the east to the Strand and the Royal Courts of Justice in the west. At the western end there’s a monument about 40ft high in the middle of the road, with a small statue of Queen Victoria on the side and a dragon on top. This is Temple Bar and marks the boundary between The City of London and the City of Westminster. 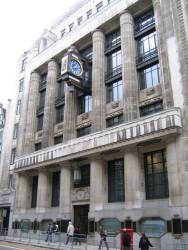 Originally Temple Bar was a wooden archway that got destroyed in the Great Fire of London. It was replaced in 1669 by a stone one designed by Sir Christopher Wren and that one stood until the 1880’s when it was dismantled and sold to allow the road to be widened. It was bought and reassembled at Theobald’s Park to the north of London. That’s not far from where I live and I remember seeing it when I was a kid surrounded by trees and bushes in the middle of nowhere.

In 2004 it was taken apart again and brought back to the City of London and you can see it today to the left side of St Paul’s Cathedral, next to Juxon House and it provides the entrance to Paternoster Square. The name Temple Bar comes from a church of the Knights Templar which was near the original site.

The big shake up in the newspaper industry started in 1985 when Rupert Murdoch suddenly moved his News International operations to Wapping, near Tower Hill. It was a modern production facility and needed a fraction of the staff of the old operation. The union’s didn’t take this move lying down and there was a lot of violence outside the Wapping plant in it first few months after it opened. 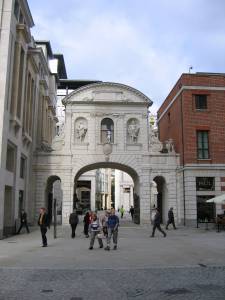 The union’s had only themselves to blame, they operated the industry like the Soprano’s. A closed shop where you had to know someone or have a relative in the union to get a job printing, which they made sure was highly lucrative for their members. ‘Ghost’ worker’s, which remind me of the Mafia’s ‘no show’ and ‘no work’ jobs they hand out, this was all part of the print worker’s Spanish Practices and it took a hardheaded person like Murdoch to take them on.

In the years that followed all the major newspaper’s left for new facilities outside of Fleet Street and Reuter’s was one of the last news agency’s to leave in 2005 when they moved to St Katherine’s Dock.

The word’s ‘Fleet Street’ were always used as a collective term for the news press and even though they’ve gone from there people still know what it means.
By a strange coincidence News International are at this moment (Nov2006) building a brand new printing facility for their papers, The Times, The Sunday Times, The Sun and News of the World, on the A10 Cambridge Road just past the M25 in north London. Right over the road from there, across a ploughed field is Theobald’s Park where the original Temple Bar was until two year’s ago.