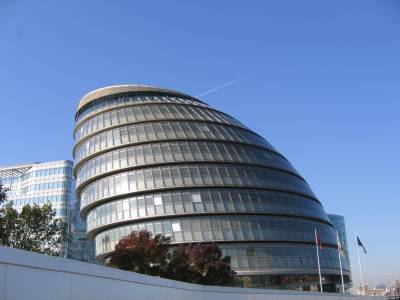 On the south bank of the River Thames, directly across from the Tower of London is an unusual looking building, the recently built City Hall. Its a 10 storey glass office block that looks like its leaning over to one side.

It was designed by Norman Foster, cost £65million and was opened in July 2002. It’s the home of the London Assembly, the body that oversee’s the activities of the Mayor of London, and the building has been leased to the Assembly for 25 years. There are 25 members of the Assembly and they are elected at the same time as the Mayor.

City Hall was designed and built after a competition to find the best location and design and the public had a say in which one was chosen. It’s 45 metres high and has 25% less surface area than a cubed building of the same volume. The design means that its the most energy efficient shape and combined with internal features allows it to run on a quarter the energy used normally for a coventional building that size. 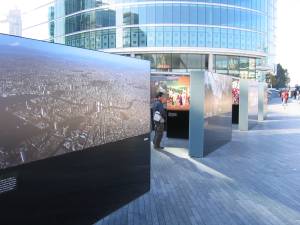 If you’re around Tower Bridge or the Tower of London go into City Hall and take the elevator to the 9th Floor which is given over to public viewing. There’s an outside balcony that runs almost 360 degrees around the building and offers great views, its the best place to take photos of Tower Bridge or the Tower of London on the opposite river bank. You can see west to St Paul’s, down river to Canary Wharf or off into deepest south London.

The public are allowed into City Hall between 8am-8pm Monday- Friday and on certain weekends. Access to the lower ground, ground and 2nd floor’s is not restricted but it is to some of the floors with offices above. There’s a security check once you enter the building similar to airports where they’ll x-ray any bags and ask you to empty your pockets. 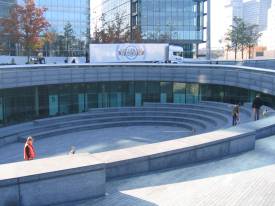 Outside City Hall along the riverbank there’s currently an outdoor exhibition of large photographs by the Japanese photographer Hiroji Kubota who spent four years travelling around Japan to capture some of the images on show.

On the west side of City Hall is a sunken area known as the Scoop, an area of circular steps that can seat up to a 1000 people but is probably more used by as some to eat a quick lunch, it faces the cafeteria on the lower ground floor of City Hall. Map