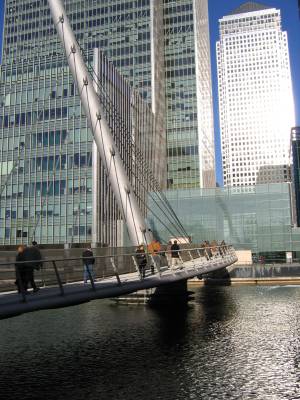 There’s a green-coloured foot bridge that you can take from West India Quay to the other side of North Dock at Wren’s Landing. In front of you are some steps leading up to Cabot Square, an open area with some modern sculpture and a circular fountain, surrounded by office blocks; the three to the right are used by Credit Suisse and the one to the left by Barclays Capital.

There are also several riverside pubs and bars along here.

Down the steps to the left in the sandy coloured stone building is Cabot Place, a long shopping mall on three levels that is split into east and west sections by Canary Wharf DLR station running through the middle of it. You’ll find all the shops you’d expect a young professional to need, whether its getting a new shirt or the trendiest coffee.

Apart from Barclays and Credit Suisse, some of the other big companies to have relocated to Canary Wharf include newspapers like the Daily Telegraph, The Independent and the Daily Mirror, as well as news agency Reuters. Apparently, 98% of office space in Canary Wharf is occupied right now. It must be a pretty nice place to work, new buildings, everything available, great places to socialise at lunch or after work and as there are only a couple of roads running through the area it seems like its fairly free of noise pollution.

If you carry on walking straight through Cabot Square and across the road, there are some steps called the Cubitt Steps that lead down to area around Middle Dock. 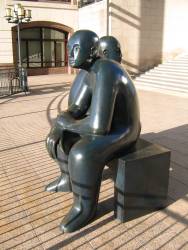 At the bottom of the steps are sculpture’s of two seated figures who look like they’re comtemplating some deal that just went in the toilet and there are a number of bits of comtemporary art spread about the the Canary Wharf area.

The offices here are used by Morgan Stanley and the other banks but there are shop and bars on the lower floors and if you carry on walking east you’ll soon come to one of the two entrances to Canary Wharf station outside of Cabot Place. There’s a small landscaped park with a series of little fountains flowing into each other, a peaceful enough spot to eat a sandwich but not very private as you’re overlooked from all sides by tower blocks.

Before long you’ll reach the quayside again and you might catch a glimpse of the Dome not too far away. Turn south/right and walk down to the corner of the quay and get a good view over South Dock. On the far side you’ll see a lot of the apartment buildings that have been put up or renovated, there’s a curved suspended footbridge that you can use to cross over to the far side, down near the Heron Quays DLR stop.

If you crossed over you’d be on the South Quay side, more residential, more streets and vehicle traffic but if you follow the dockside all the way along to its eastern end you’ll come out on to Preston’s Road. 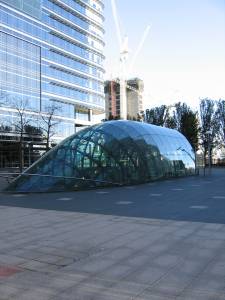 Here there’s a raised bridge that gives access to the Thames from the dock and if stand on the bridge and look directly across the river there’s a clear photo shot over the water of the Millennium Dome, just in case you wanted a photgraphic record of how to blow £1billion.

Canary Wharf might be a place that visitors to London don’t automatically put on their to do list but its well worth spending sometime there. You get to see some of the most modern buildings in London, visit an excellant museum and have a large choice of places to eat and drink and rub shoulders with some of the financial movers and shakers in London and the atmosphere is pretty relaxed, probably because of all that water everywhere.

Anyone taking the Docklands Light Railway to Greenwich will pass through Docklands and Canary Wharf and I’d be surprised if they didn’t get off or at least made a note to come back and take a look around.