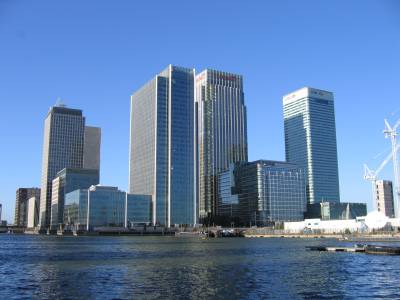 At the start of the 1980s, Canary Wharf comprised 8.5 square miles of unused docks and river frontage. The area had fallen into disrepair since Tilbury, further down river, started handling all of London’s container ship traffic.

This area was spread between five London boroughs, and local planners wrestled with ideas to grass it over or build a zoo, prison or power station. Eventually, it was decided that Canary Wharf should be turned into a shopping and tourist destination beside the Thames. 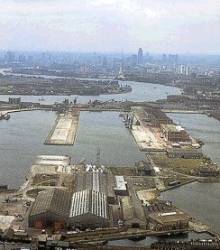 In 1981 the government set up the London Docklands Development Corporation to oversee the installation of infrastructure and the regeneration of the Docklands. Companies investing there got looser planning controls and tax breaks and initially the plan was for small scale industry to move in. Then in 1984 the chairman of Credit Suisse First Boston was having lunch on a boat moored at Canary Wharf and said how the old warehouses reminded him of the buildings around Boston harbour that had been converted to back up offices for the banking industry.

CSFB had meetings about what to do and decided on a radical plan to not build a back up office but to move all their operation out of the City of London and into the Isle of Dogs. At that time the Conservative government deregulated the financial services industry and suddenly merchant banks needed much more office space which wasn’t available in the City. Other banks like Morgan Stanley followed CSFB and Canary Wharf’s boom was on.

Today Canary Wharf is a thriving financial and business part of London but its also a great place for visitors to London to spend some time. The new office towers are impressive but the old warehouses have been retained and converted and the whole area seems to have a river frontage, water plays a big part in the ambience of the place. 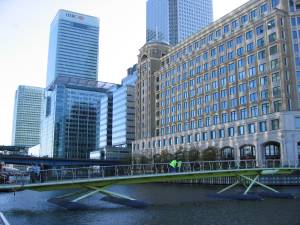 Because it’s all new they were able to build the elevated Docklands Light Railway to run right through the middle of the development and you can get a great overview of Docklands just riding the train.They also built it so the stations are frequent and not far apart(about 300 yards between West India Quay and Canary Wharf) and you’ll always get dropped off near the centre of activity.

If you’re coming from central London go to Bank station on the Central Line to catch the DLR and make sure you take a train heading to Lewisham. If you get off at West India Quay station and walk down the stairs, the 30+ storey building with the curved face is the Marriot Hotel and next to that running the length of the dock front are the old West India Quay brick warehouses.
These were Grade 1 Listed, former sugar warehouses that couldn’t be demolished as part of the reconstruction and have instead been turned into apartments, shops and bars and restaurants that all have large outside seating areas because the quayside here is so wide. This place will be buzzing in the summertime. The western end of West India Quay has been converted into the Museum in Docklands which is well worth spending some time in. 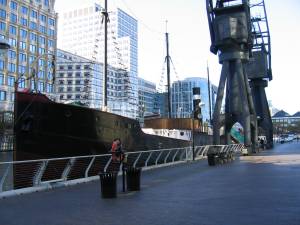 There are a number of boats moored up along that stretch of quay, opposite the Marriott is an old steamship called the SS Robin which is used to run classes for disadvantaged kids but also has a sign saying its free to visit. When I was there it was closed so I’m not to sure on when you’re allowed on board to look around.

One thing you’ll see quite a few of around the Docklands area are the giant old cranes that were used to unload ships. They were going to be broken up for scrap but the developers decided to keep them and now they’re a real feature and a reminder of what used to take place on the site.