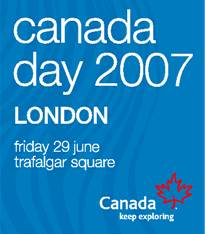 1 July is Canada Day but London is holding its Canada Day celebrations this Friday 29 June in Trafalgar Square. The event begins at 12 noon with Dene Drums and runs until 9.45pm. In between you can experience everything Canadian from Olympians demonstrating freestyle skiing and boarding to a street hockey tournament, First Nations native dancing and drumming, fiddling and the Mounties will be on hand.

You can sample Canadian cuisine at the Quebec Cafe or go for a Bison Burger and course they’ll be plenty of Canadian beer to get stuck into. From 4pm-9.45pm there’s a free concert featuring some of Canada’s latest names to break on the music scene including the Sam Roberts Band, hip hop vocalist K’Naan, Montreal band Land of Talk, four piece band The Midway State, singer-songwriter Justin Nozuka, Scottish-Canadian Johnny Reid, the lovely looking opera singer Alexandria Beck and the Nova Scotia musical Drum which combines Black, Acadian, Aboriginal, and Celtic music.

There will also be stands with experts to answer questions on holidaying in Canada or emigrating there. Should be a good day and I expect a pretty big crowd on a Friday afternoon and evening, hopefully the weather picks up a bit.