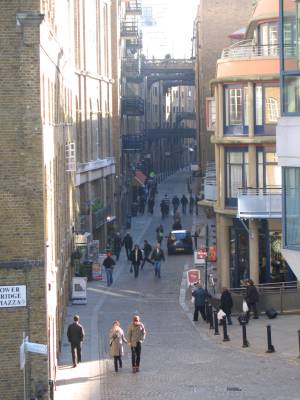 A area that visitors might miss out on looking around is Butlers Wharf, right next Tower Bridge on the south bank of the river immediately east of the bridge. The Wharf was originally built in 1873 and was the largest warehouse complex on the Thames handling tea, coffee and spice imports and it formed part of the Port of London docks.

By the late 60’s containerisation meant larger ships were docking further down the Thames and by 1971 Butler’s Wharf was forced to close. The warehouse started to fall into disrepair and the owners decided to rent out individual spaces in the warehouses to try and avoid them being vandalised. This opened the Wharf up as a base for artists and up until about 1980 seven of the warehouses were used by sculptors, painters, photographers and dancers. Looking at it you can imagine how much space they’d have to work in.

By the early 1980’s the developers had moved in and started to make a killing turning the whole area into luxury flats, restaurants and galleries. It does look good, I wouldn’t mind a place in that area myself. The redevelopment has retained the over head iron bridges between warehouses that were used for moving goods around and the brickwork, cobbles and narrow passages between the buildings makes it an atmospheric place to walk round and gives a feel of old London, a bit of fog here at night would be perfect. 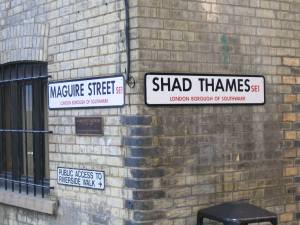 The area the wharf is in is called as Shad Thames which is derived from St John at Thames. It’s known for its restaurants now and they all face on to the Thames and have great views across the river and up at Tower Bridge. The nice thing is there’s plenty of space between the actual warehouse buildings and the riverside giving each restaurant room to have outdoor eating areas and still lots of space for people to walk, for benches to sit on or odd pieces of art.

A few of the well known restaurants at Butler’s Wharf include the Chop House, Le Pont de la Tour, Browns, Cantina del Ponte, and more than one of these are owned by Terence Conran who had a big hand in the redevelopment of Butler’s Wharf. You’ll also find a large All Bar One in between this lot if you just fancy hanging out for a drink and its a great location to knock back a few pints in. 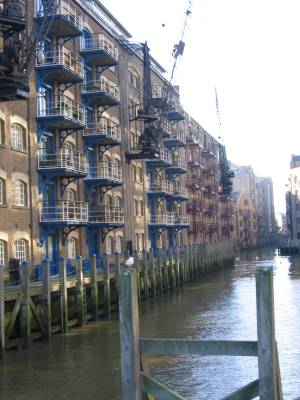 Towards the eastern end of the river front warehouses is the Design Museum which is all glass and white walls and doesn’t really fit in with its surroundings, at least I don’t think so. They do have a lot of pretty cool exhibitions in there though.

If you carry on walking along the riverside path you’ll come to St Saviour’s Dock, a tidal inlet that was notorious for pirates in the 18th century when ships had to moor up and sometimes wait weeks to be unloaded.

This is all moderrn apartments now but it does capture the ambience of Victorian London and Charles Dickens actually set part of Oliver Twist here, he used it as the location for Bill Sykes’s den. Part of the 1968 movie Oliver was shot in the warehouse on the left.

If you’re looking for a walk where you can get a glimpse of what old London might have been like and then be able to treat yourself to a nice lunch in a top location, take a look around Butler’s Wharf and Shad Thames. Just walk across Tower Bridge to the south bank and take the first set of stairs to the left and you can’t miss it.