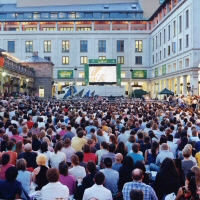 The Royal Opera House in Covent Garden has got together with BP to put on the BP Summer Series, three live transmissions of opera and ballet productions from the stage at the Royal Opera House to big screens in large squares and parks across London and the UK.

The first of the performances to be screened is this week on Thursday 31 May at 7.30pm when the Opera House stages Tchaikovsky’s Swan Lake. They’ll be big screens with sound set up in Trafalgar Square (which has been temporarily turfed this month) and at Canada Square in Canary Wharf. The show lasts around 2hrs 50mins with two intervals and the screenings are free to attend, so get get some food and a bottle of wine and hopefully the weather will be kind for an evening outdoors.

The second screening is on Wednesday 13 June, its a performance of Mozart’s Don Giovanni and starts at 7pm. The big screen will be set up in Covent Garden Piazza for this one and due to the location is bound to be busy, so get there early. Don Giovanni last 3hrs 25mins and there’s one interval.

The third in the BP Summer Series is on Tuesday 3 July when the Royal Opera House stages Puccini’s Tosca at 7.30pm. For this performance big screens will be at Victoria Park in Tower Hamlets, Canada Square in Canary Wharf, and at Potters Fields on the banks of the Thames between Tower Bridge and City Hall. Tosca lasts around 3hrs and has two intervals. If the weather’s good over the next month why not get out and enjoy a free evenings entertainment.