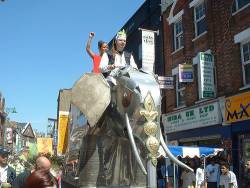 This Sunday the streets around Brick Lane in London’s East End will packed with up to 200,000 people from the local area and across Britain celebrating Baishakhi Mela, the Bengali New Year Festival.

Banglatown, as that part of London is known, is the centre of the capital’s Bangladeshi community and also home to probably the largest concentration of Indian and Bengali restaurants in Britain.

Baishakhi Mela begins on 13 May with a Grand Parade starting just after 11am from Allen Garden on Buxton Street to Weavers Field on Dunbridge Street. The parade features women and children dressed in colourful traditional clothes and masks, musicians, dancers and community leaders as well as massive colourful Elephants and Tigers, Peacock boats, Bridal rides and Rickshaw rides.

After the parade Brick Lane, Vallance Road and Buxton Street will all be taken over by the Mela with over 300 stalls selling food from local restaurants, traditional handy crafts, fashion jewellery and clothing. They’ll also be over 350 performers on three stages. Weavers Field will have the main stage featuring international and local artists performing everything from Bengali traditional and folk to Baul, Modern, Fusion, Classical, Bangla Rapp, Bollywood, Bengali rock, Bhangra and contemporary east/west fusion, on from 12.30-7.30pm.

Allen Garden will have the community stage featuring local and national acts as well as magic shows, rickshaw rides and a children’s art workshop. They’ll be food and craft stalls at both venues. Also at 1.30pm at Weavers Field they’ll be a chance to see Kabadi, the national sport of Bangladesh.

The weather forecast is mixed for Sunday but there should be a lot to see and do at the Mela so take a look if you’re free that afternoon. Nearest Tube is Aldgate East.